Ruby is a corundum variety, with a red color. The red hue results from the presence of chromium in traces (usually less than 1%), in substitution of aluminum. More chromium containt is important and more the ruby will be red and also fluorescent (however the fluorescence is also inhibited by the presence of iron). The most appreciated variety, known as "pigeon's blood", is of an vivid red, color however rarely homogeneous within the same crystal. The ruby occurs mainly in alluvium (so-called "gemmifera"), the primary deposits being metamorphic limestones or aluminous enclaves of volcanic rocks. This mineral owes its name to the Latin "rubeus", in relation to its color. The ruby is usually rough hexagonal crystals with rounded faces. The crystals adopt forms of acute or truncated pyramids, short prisms, rarely lamellar, barrels with sometimes striated faces. Ruby is a highly esteemed gemstone since immemorial times. The great Indian poetic epic of Ramayana relates the birth of rubies, considered as drops of divine blood fallen in the Queen of Rivers. Since the night has come, the banks of the rivers are illuminated by these sparkling gemstone. In addition to the poetic aspect, these texts are of historical value, testifying to the strong presence of the rubies in the Indian culture in those times which precede the Christian era. Rubies, just like sapphires, were supposed to bring happiness and possess many virtues as varied as "purifying blood, resisting venom, fortifying the heart, chasing melancholy..." These triennial beliefs will only begin to be scratched only in 1696, in the universal dictionary of simple drugs of Nicolas Léméry. Today rubies are always in demand in jewelry where the most beautiful stones can reach huge prices. The crystals of beautiful shapes and beautiful color are very rare and sought after by collectors. Synthetic rubies are also an essential part of lasers.

Ruby in the World
​The most beautiful rubies come from the gemmiferous alluvium of Mogok, Myanmar (formerly Burma) where the pigeon's blood crystals can reach 5 cm, associated with sapphires and spinels. Beautiful gemstones also come from the alluvial fields of Sri Lanka (Ratnapura and Elahera), Jegdalek in Afghanistan and Luc Yen in Vietnam. In Europe the Swiss field of Campolungo has supplied good quality pink stones. Also noteworthy are the magnificent red crystals, sometimes gemmy, of decimetric size, drowned in the green zoisite of the Tsavo Reserve (Kenya) and the Arusha region (Tanzania) as well as those of the Madikeri region in India associated with the fuschite which are extraordinary ornamental stones.

The largest ruby in the world is the "125 West Ruby". This unique specimen weighs nearly 4 kg (18,696 carats) but of unknown origin. The Rajaratna ruby, discovered in the late 1980's, is considered one of the largest gemmy rubies in the world. It weighs 2475 carats and is part of the collection Vidyaraj and certainly from Burma origin (or Indian). 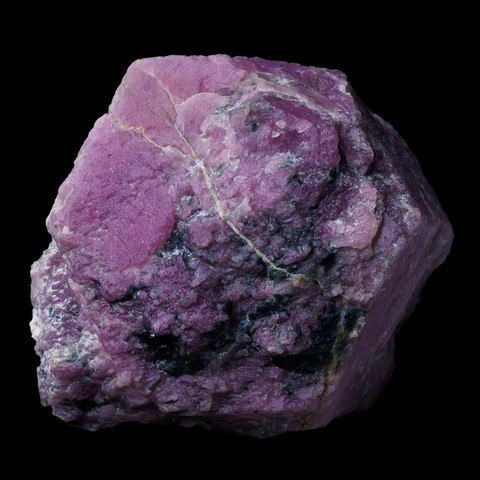 In France, the ruby is found anecdotally, especially in Haute-Loire department in a matrix of anorthites and pargasites around Lavoûte-Chilhac where pinkish crystals can exceed one centimeter in size. With a greater dimensions, the La Rode bridge in Aveyron produced hexagonal crystals of the order of 4 cm section, they are certainly the biggest in Metropolitan France (photo right). Fi

Asterism.
The ruby can also present an asterism, we speak then of star rubies. When viewed under the light of a spot, a six-pointed star appears on the surface of the gemstone. It is the reflection of the light on inclusions of rutile which is at the origin of this phenomenon. These are fine rutile needles distributed in parallel along three axes that intersect at 120° in the stone. Only the cabochon size reveals the asterism of a gemstone. For this, the base of the cabochon must be parallel to the inclusions of rutile. Like all star-gemstones, the most sought-after rubies are those whose star is complete, well centered on the gemstone, and whose star is as precise and fine as possible. Photo copyright The Jewelry Editor - Mountain Star Ruby Collection.

Due to its world renown and a relatively low production of jewelry quality crystals, ruby is enormously treated and synthesized. We will try below to establish an exhaustive list of all that is done around this mineral.
The heating :

Almost all faceted natural rubies on the market are now heated. This process is used to expand or intensify the color by removing or reducing zoning. This treatment can also affect the clarity of the stone by removing or reducing inclusions. The heat is widely accepted by the market, it eliminates the brown hue of Thai rubies, Sri Lankan rubies are intensified in color while rubies from Mong Hsu (Myanmar) lose their dark hearts. This explains the great value and rarity of untreated gemstones. This treatment can generate discoidal fractures around the inclusions present in the ruby ; blue halos may also appear around rutile inclusions due to titanium diffusion in the host ruby, however, clues of heating may also obscure diffusion or fracture filling (detailed below).

Controlled and slow heating and cooling can also generate asterism in some translucent stones by allowing epitaxial (oriented) recrystallization of rutile within the ruby.

It is a technique developed in the 90's to make some highly fractured rubies of Mong Hsu (Myanmar) marketable. This technique involves injecting at high temperature and "heal" the fractures with a glass (usually lead glass) of the same refractive index as the ruby to restore its transparency. The value of rubies treated with this technique is strongly affected. It is not always easy especially for the neophyte to identify this treatment. Generally all large rubies whose natural fractures reach the surface of the gemstone are treated with this technique.

This treatment can also be carried out at room temperature by injection of colored oil or epoxy, the treatment is not stable.

This treatment is relatively new and it is very difficult to identify, it is to heat the gem at very high temperature in the presence of beryllium to diffuse this beryllium inside the gemstone and change its color. This treatment is usually performed on stones whose color is not very intense to improve it. On large stones it is possible by immersing the ruby in water, to see that the diffusion did not reach the heart, we note then a orange halo on the outer edge of the gemstone, which loses intensity towards the center. On small gemstones, however, the treatment penetrates to the heart, it is impossible to identify without advanced laboratory techniques. This treatment can generate milky UV fluorescence.

Synthetic rubies :
The flame-fusion (or Verneuil) :
​It was a French scientist named Auguste Verneuil who first succeeded in synthesizing ruby in the laboratory in 1902. At that time it was impossible to tell the difference between the true and the false, which considerably affected the value of this gemstone. The process is quite simple, alumina powder and chromium is flame-melted in an oven, molten grains fall on a rotating base, which forms a "boule" of synthetic ruby. This process is also used to make any type of corundum or spinel, it allows to create perfectly transparent gems very eye-clean. However under magnification, these synthetic gemstones have curved growth lines, which are not found in nature ; the gem also has micro-bubbles of air, also completely absent from natural gems. Finally Verneuil rubies exhibit an extreme bright red fluorescence, rarely matched by natural counterparts. Diagram on the right showing the process - Copyright Peter Johnston / GIA

The Pulling.
​The method known as "pulling" appeared in 1918. It allowed to produce synthetic rubies with less internal growth marks but also much larger (40 cm long and more than 10 cm wide). Pulling is a more complex and expensive technique, but it also makes it possible to produce synthetic crystals more quickly. The appearance and expansion of lasers in the 1960's greatly contributed to the development of this method in order to obtain crystals with the least possible internal defect. This process is also known as the "Czochralski method". It consists of melting alumina and chromium in a crucible, a small crystal of corundum is attached to a rod and then brought into contact with the surface of the molten liquid to initiate the growth process. The rod turns on itself and is removed from the surface of the liquid as the ruby crystallizes to form just like Verneuil's method, a "boule". Other gems than rubies are synthesized via this method, such as alexandrites, chrysoberyls, star-sapphires and sapphire, as well as YAG (yttrium-aluminum garnets) and GGG (gadolinium-gallium garnet) which mimic the diamond. Diagram on the right showing the process - Copyright Peter Johnston / GIA
The Flux Groth
The so-called "flux growth method" was developed in the 1930's to synthesize emerald, today it also allows to synthesize other gemstones such as rubies, sapphires, alexandrites and spinels... This method is very expensive and slow. Nutrients are dissolved by chemicals in a gold or platinum crucible and then heated at high temperatures. They are then cooled very slowly so that crystals form. Characteristic inclusions in volutes of smoke are always visible (photo left).